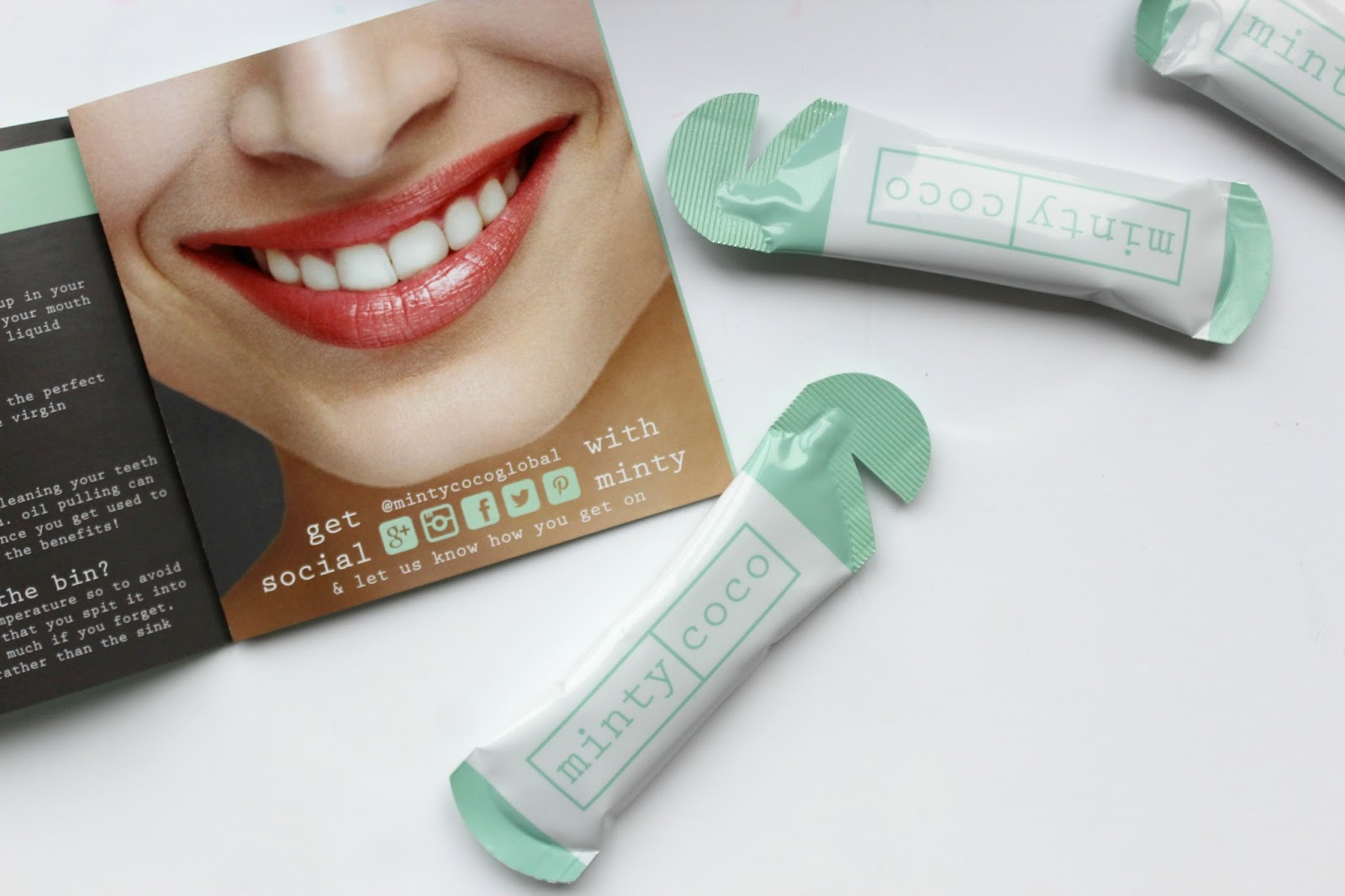 Over the years I have definitely tried my fair share of at home teeth whitening treatments. Whilst the majority don’t end up working, for those that do, you have to pay the price for sensitive teeth. Most teeth whitening products and professional treatments in general are abrasive, as they work by removing the top level of enamel on your teeth with damaging chemicals to achieve that whiter than white look. Despite not having the white teeth that I dream of I wouldn’t trade it for sensitive teeth. So with the new craze of oil pulling which has been sweeping the nation over the last year I thought I would give Minty Coco* a try. A completely natural and non abrasive form of teeth whitening that can be achieved in as little as 2 weeks. 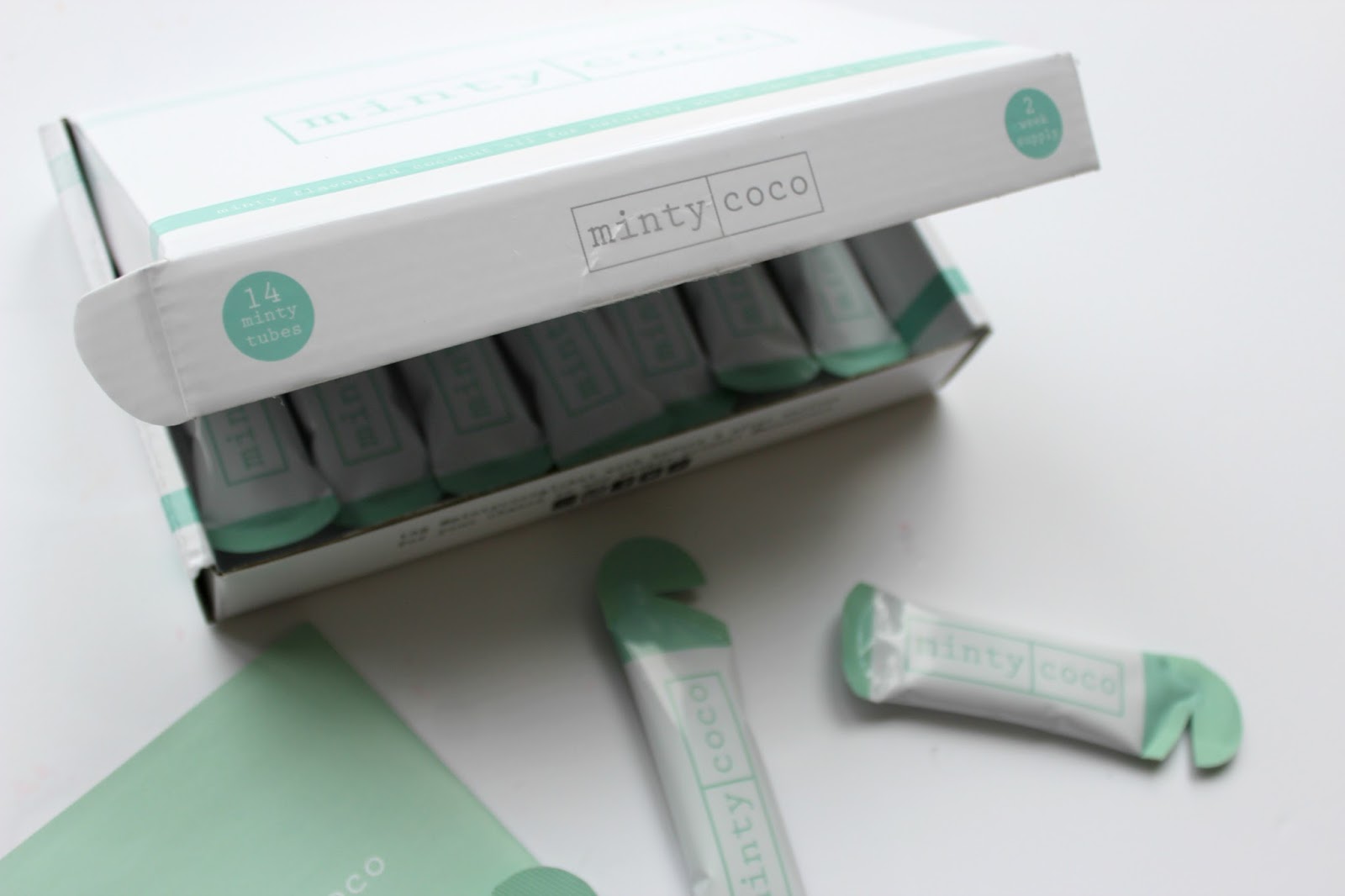 What is oil pulling?

So before we get to the nitty gritty, for those who don’t know, oil pulling is something that has been around for years, and is widely speculated for its amazing benefits, with teeth whitening being the main one. Whilst coconut oil is the most common type of oil used for this, other oils such as sesame oil can also be used. The longer that you swish the oil around your mouth (don’t gargle or swallow!) the better, they say that 20 minutes is how long it takes for it to finally break down the toxins and bacteria in your mouth, thus leading to whiter teeth! 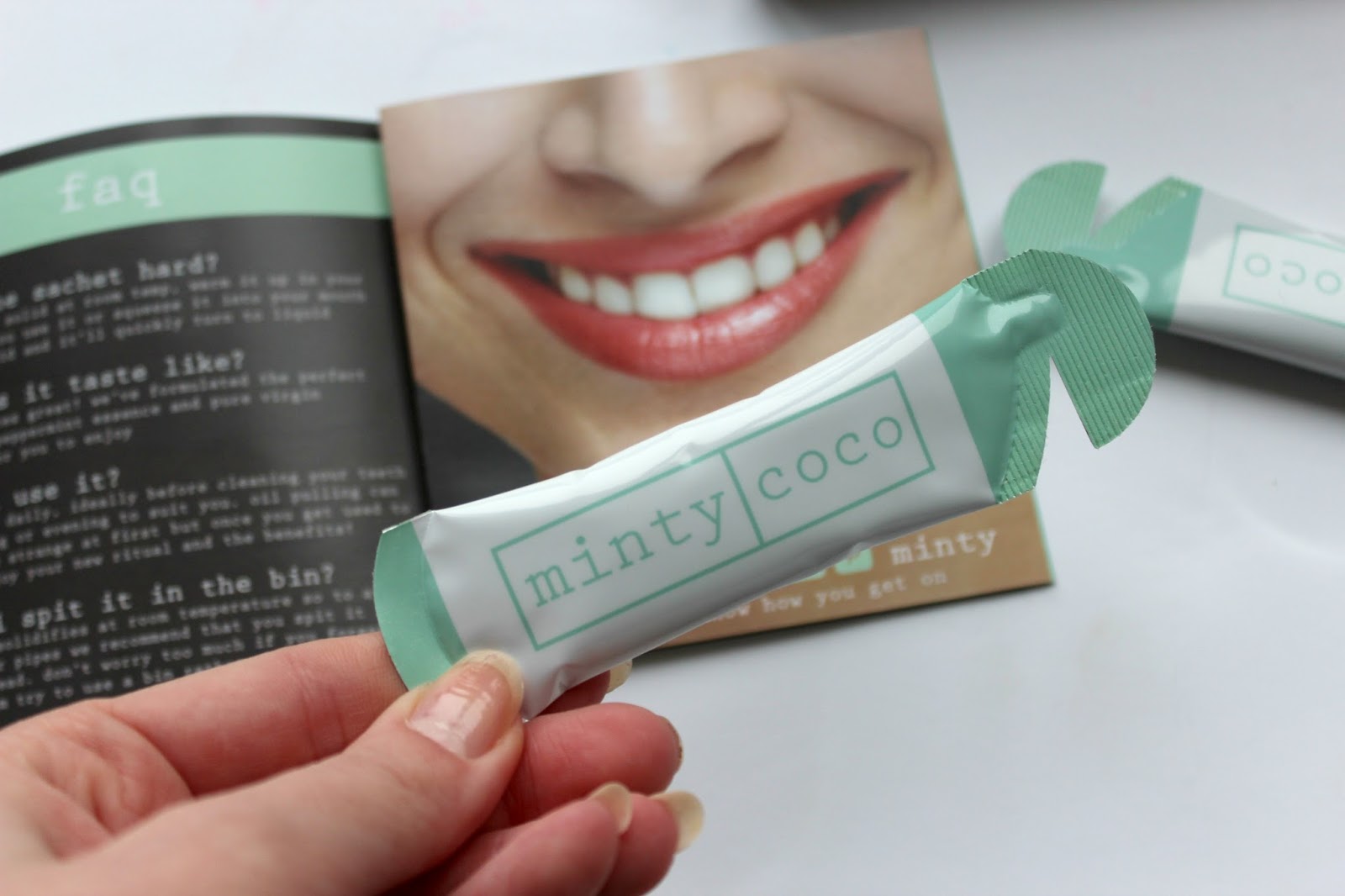 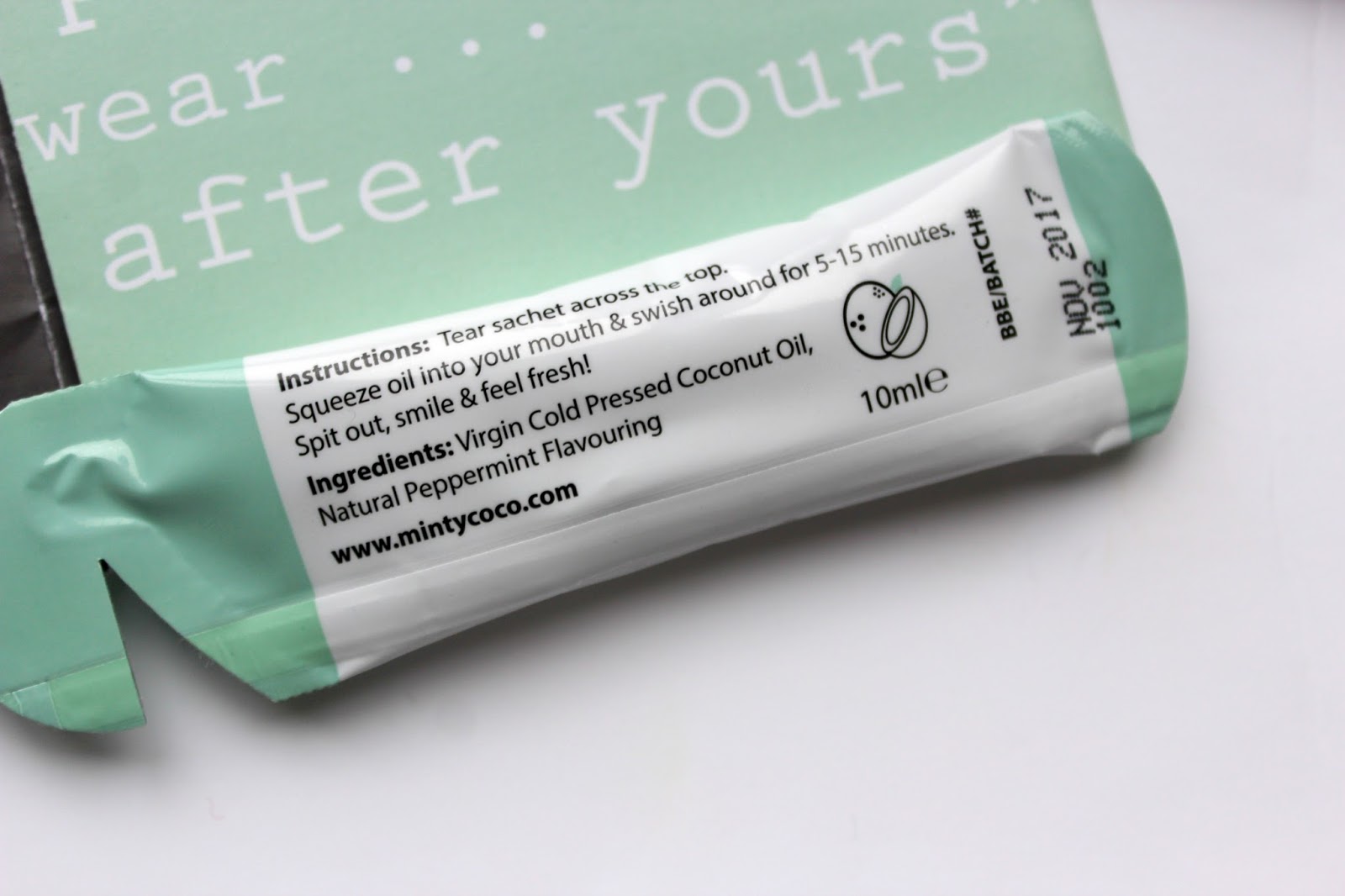 Minty Coco is an incredibly convenient take on oil pulling that comes in little sachets, with the perfect amount for your daily session. Unlike ordinary coconut oil, this has been flavoured with peppermint essence if you hadn’t already guessed it from the name! Because of this it really doesn’t taste bad at all to be swishing it around your mouth for 15 minutes. The sachets are incredibly easy to tear open once you have warmed the sachet up in your hands (it solidifies when it gets cold), they recommend to swish the liquid around your mouth for 5-15 minutes, obviously the longer you do it the better it is for your teeth, but this can get quite tedious and exhausting for your jaw after a while! 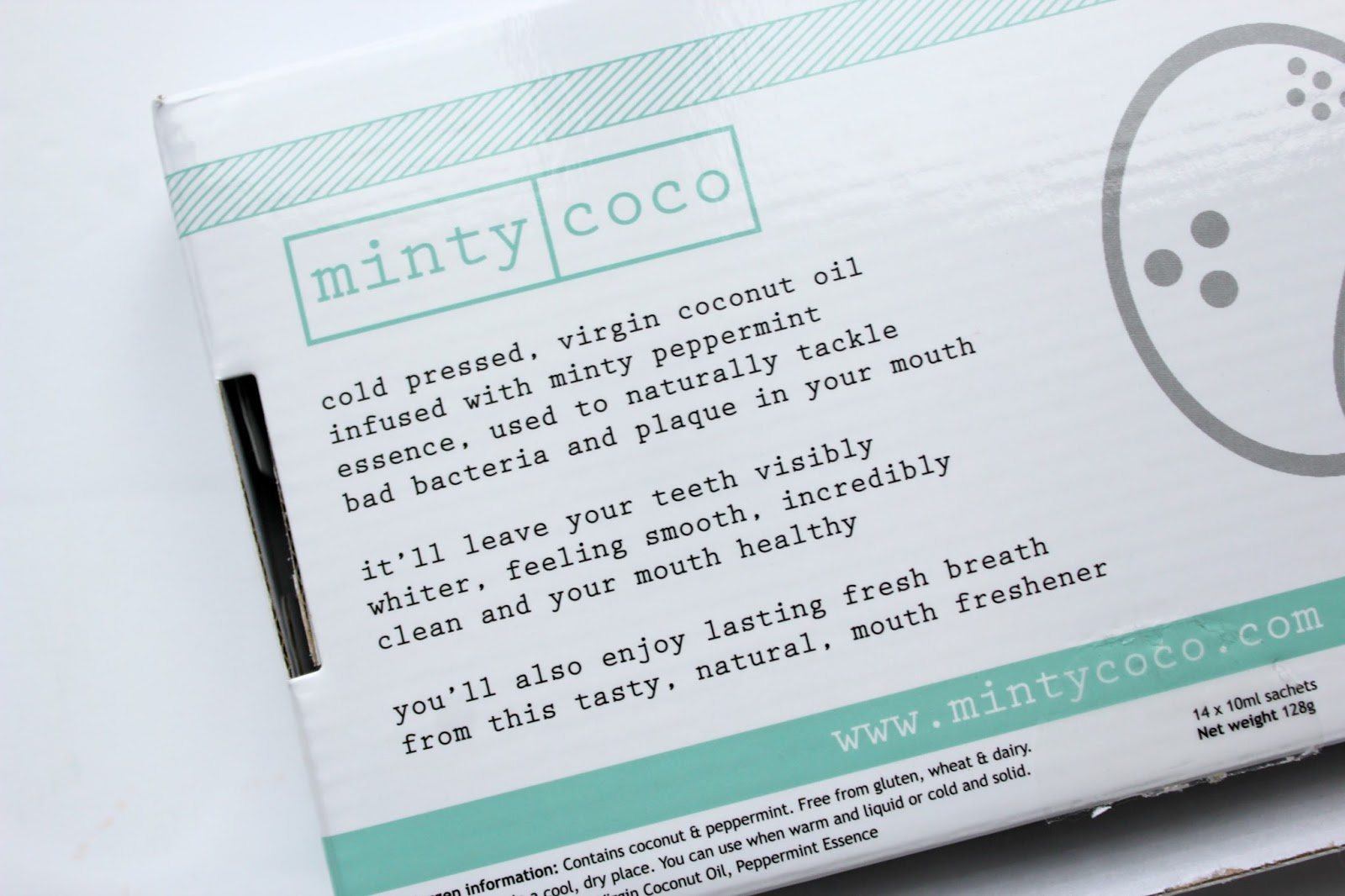 I have now finished my two week trial of Minty Coco, I was supplied with 14 sachets and I used these daily in the evening before I brushed my teeth (this can be done in the morning too). I found the whole thing really alien on the first night as I have never done anything like this before. But by the second night it came as a second nature to me and it was much easier to put all of the liquid into my mouth without the fear of swallowing it! I was dubious about trying oil pulling to start with as I had heard that regular oil pulling makes people gag from the taste of it, but the beauty of Minty Coco is that it doesn’t taste like a regular oil at all, more like a thicker mouth wash. 15 minutes to swish the liquid around your mouth does feel like a lifetime, so I only did it for just over 5 minutes every day. I found it was best to be doing something at the same time, such as taking my makeup off or having a shower.

Coconut oil in general can clog up your drains which I had no idea about before as it begins to solidify when it gets cold, so it is recommended that you spit it out into a bin afterwards. As I mentioned before, after swishing the liquid around I brushed my teeth straight afterwards. My teeth are left feeling incredibly clean and minty fresh afterwards, and the best thing is it’s completely natural and non abrasive. It’s also rumoured to be good for sore throats and your sinuses too, and from a hygiene point of view it really has made my teeth feel cleaner than ever! But this all boils down to the main question on everyone’s lips, has it whitened my teeth? 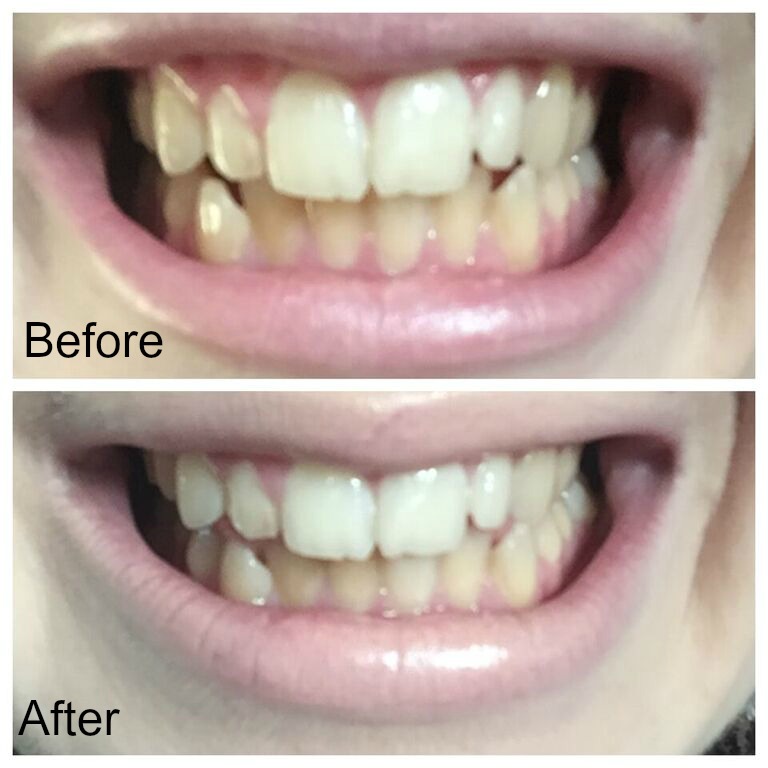 ( Sorry for the poor quality – I had to snap these on my Iphone and I wanted them to be as close up as possible (they’ve not been edited in anyway and were done in the same lighting).

As you can see from my before and after picture I wouldn’t say that my teeth look visibly whiter after two weeks, but they certainly look a ‘bit’ whiter on my top set of teeth. However, after only two weeks with a treatment that is completely natural I think you have to give it credit where it’s due. I knew this wouldn’t be a quick fix, and realistically I think oil pulling is a lifestyle choice and it’s something that needs to be a consistent part of your routine to get a whiter result. Overall, Minty Coco has really impressed me, it has made my teeth feel cleaner, breath fresher and I think I’m on my way to whiter teeth… I would recommend anyone to give this a try who is looking for a natural answer to teeth whitening. For only £19.99 it’s definitely worth it to try the oil pulling craze in a much more easier, and tastier way!

What do you think of the results? Have you tried oil pulling before? Will you give Minty Coco a try?

*Products marked with an asterix (*) have been sent to me for review. However, all opinions in this post are 100% my own