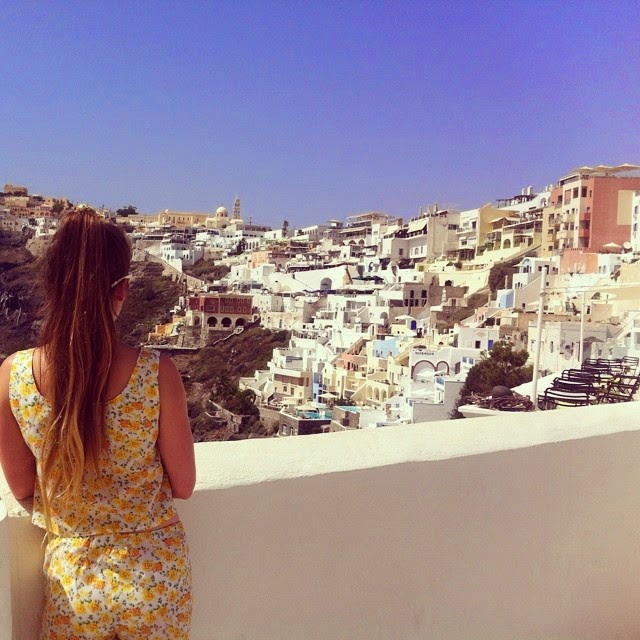 It’s that time of the year now when we are all ready and desperate for a summer holiday, I know I could do with a week or two in the sun! It’s always difficult choosing where to go on holiday and I thought I would pick up where I left off with doing travel posts on some of the amazing places I got to visit on the Eastern Mediterranean Cruise that I went on last year. I fully intended to finish doing these in the summer but other posts just got in the way and I still want to share all of the beautiful places with you that I was lucky enough to visit. Santorini is one of the most talked about Greek islands at the moment, it’s located 125 miles southeast from Greece’s mainland and is well known for its picture postcard like backdrop and its multi-coloured cliffs soaring over 300m high from the sea. It was definitely a place on my bucket list and I can confirm that it is probably one of the prettiest, Instagram worthy places I have ever visited!! If you’re stuck on ideas where to holiday this year then you might just fall in love with this pretty idyllic Greek island by the end… 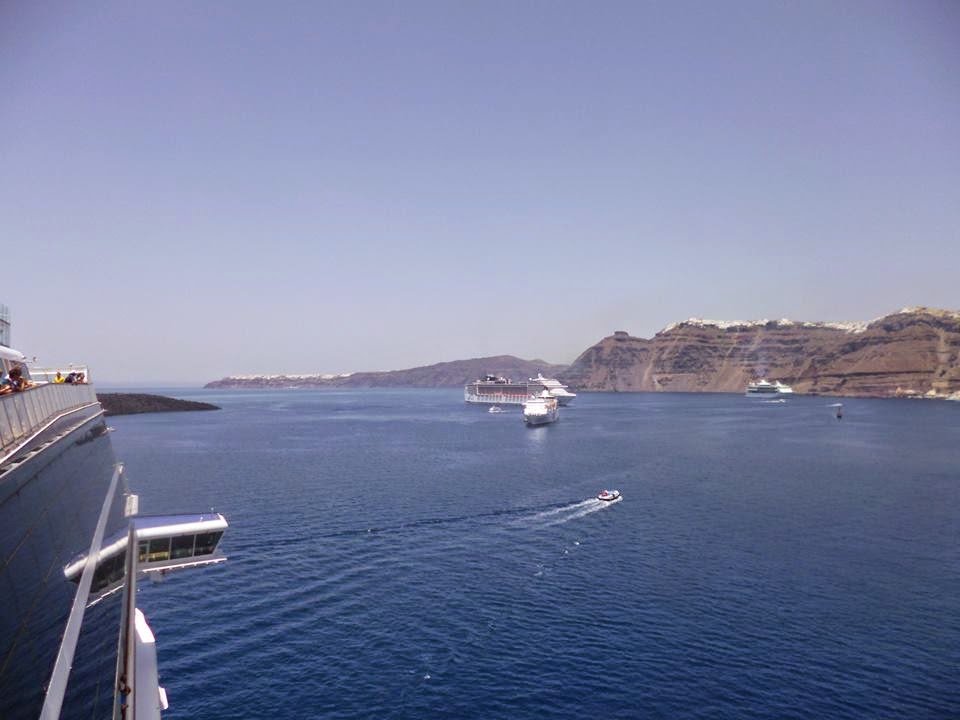 Approaching Santorini by the sea on such a beautiful sunny day was spectacular. 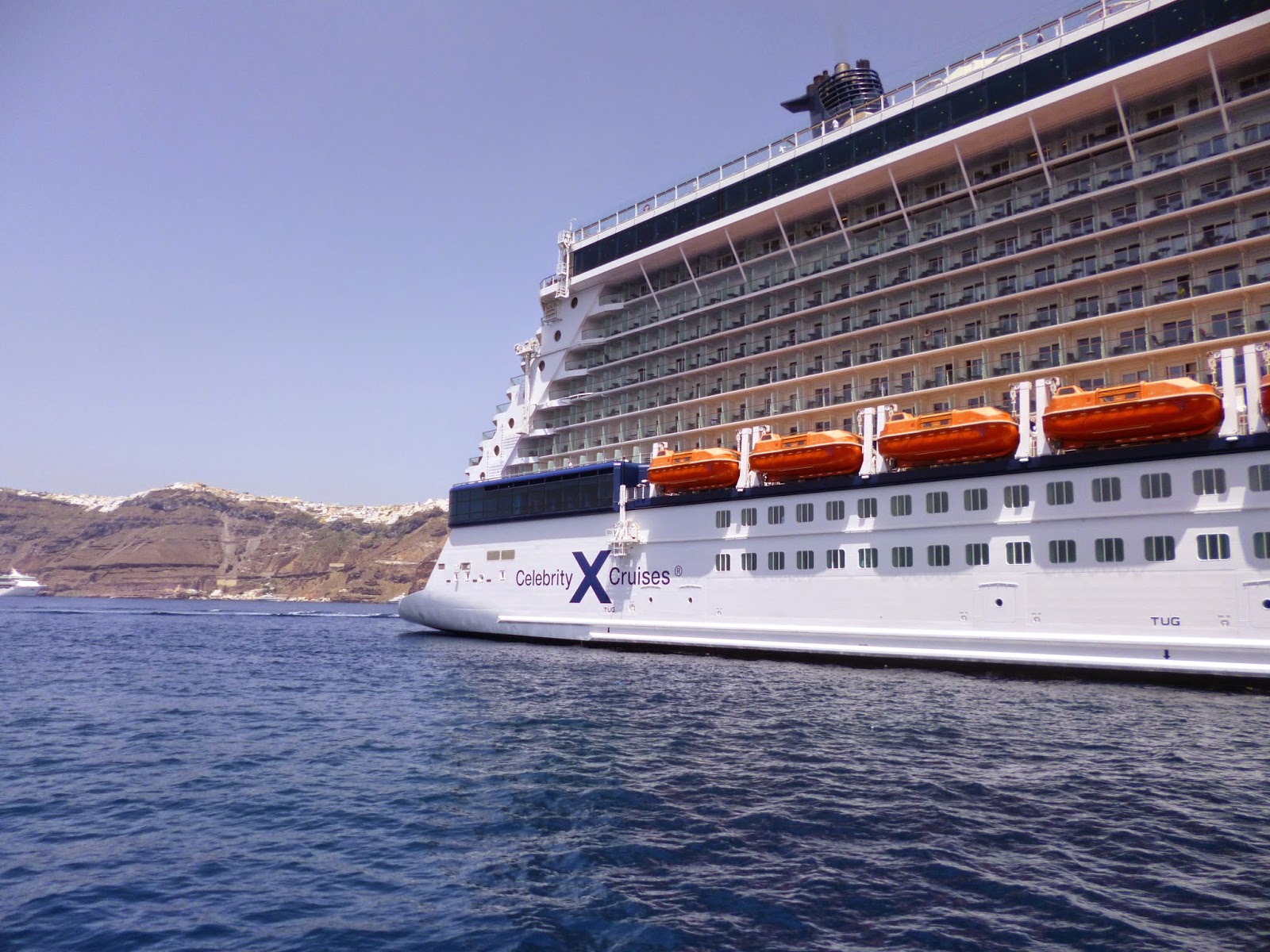 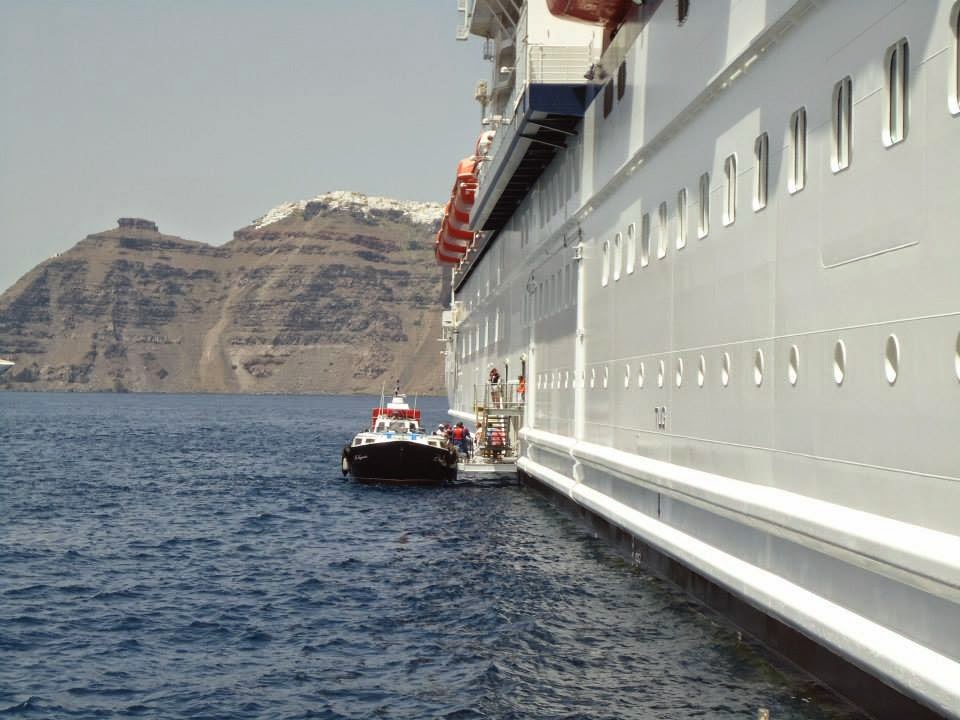 Santorini was just one of the port of calls on our cruise, I think we had around 8 hours docked in Santorini. As the water surrounding the island was shallow and the boat in contrast is so huge we had to dock out to sea and get tenders in to the island which was pretty cool! 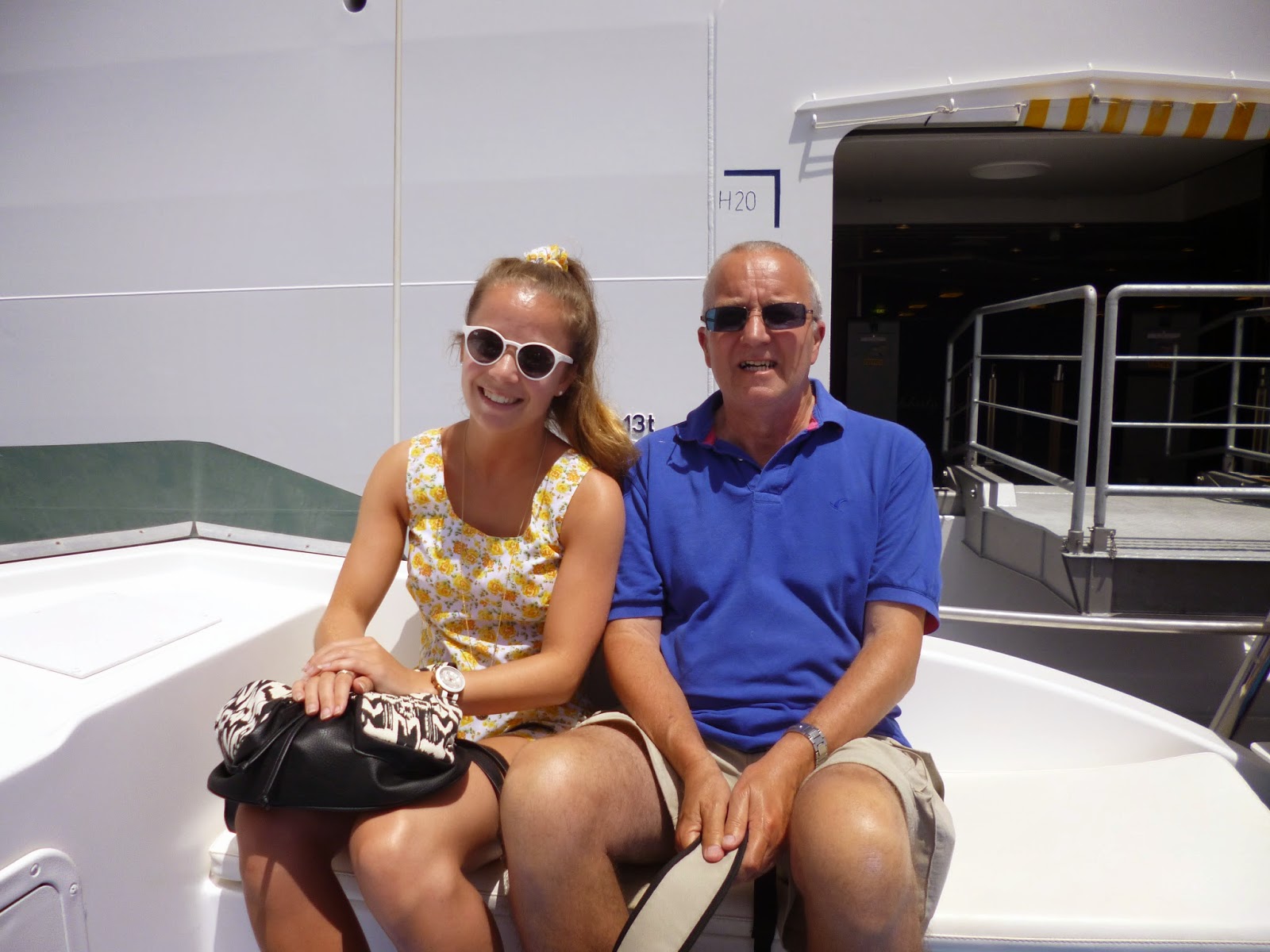 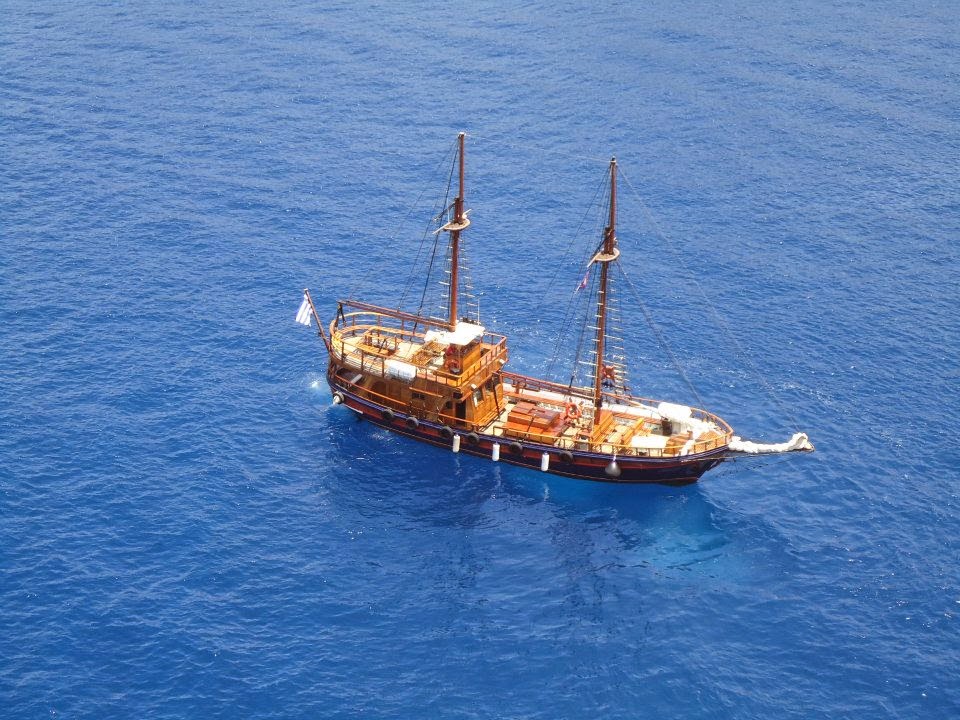 There was even pirate ships greeting us on the way in… 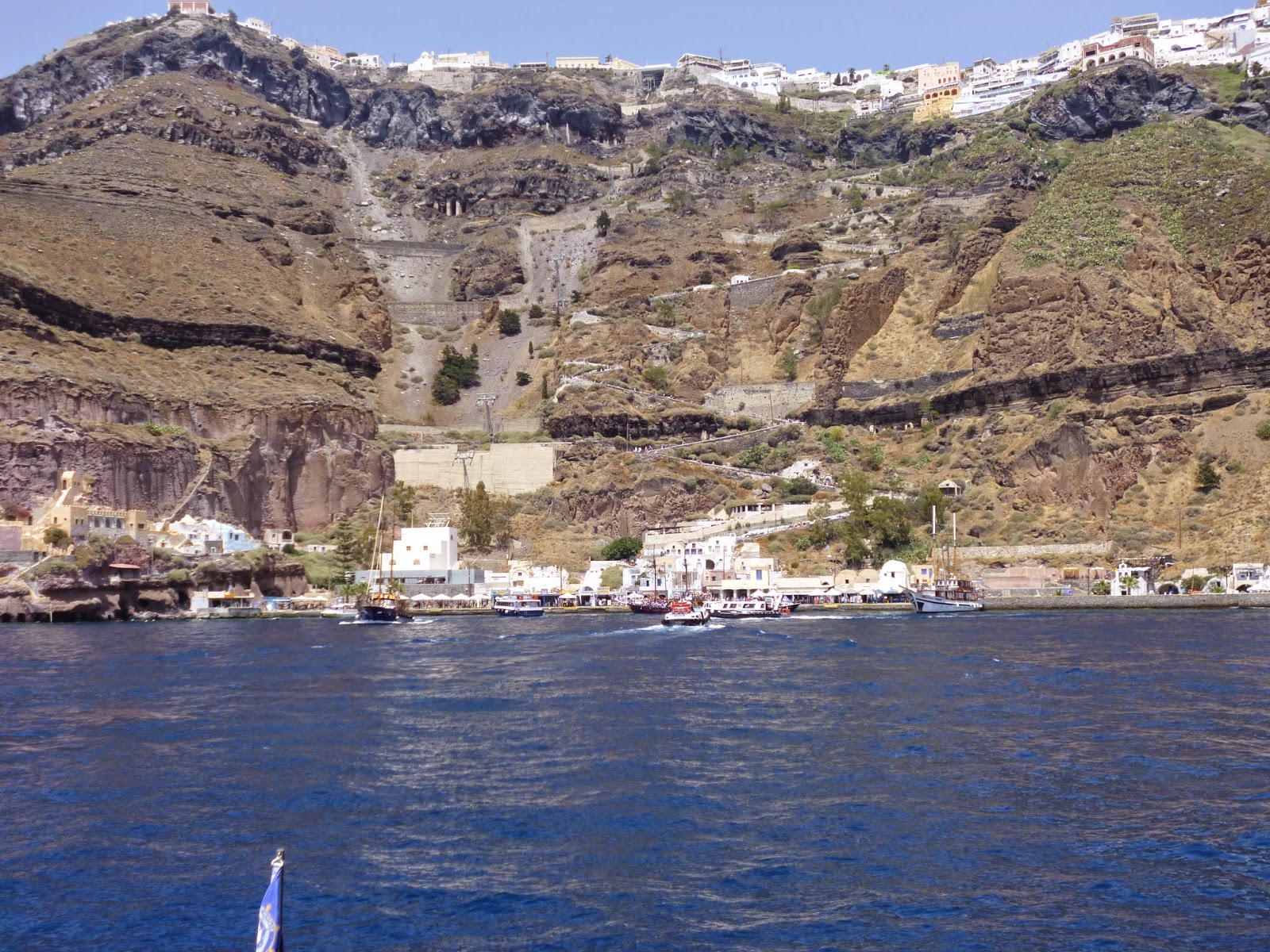 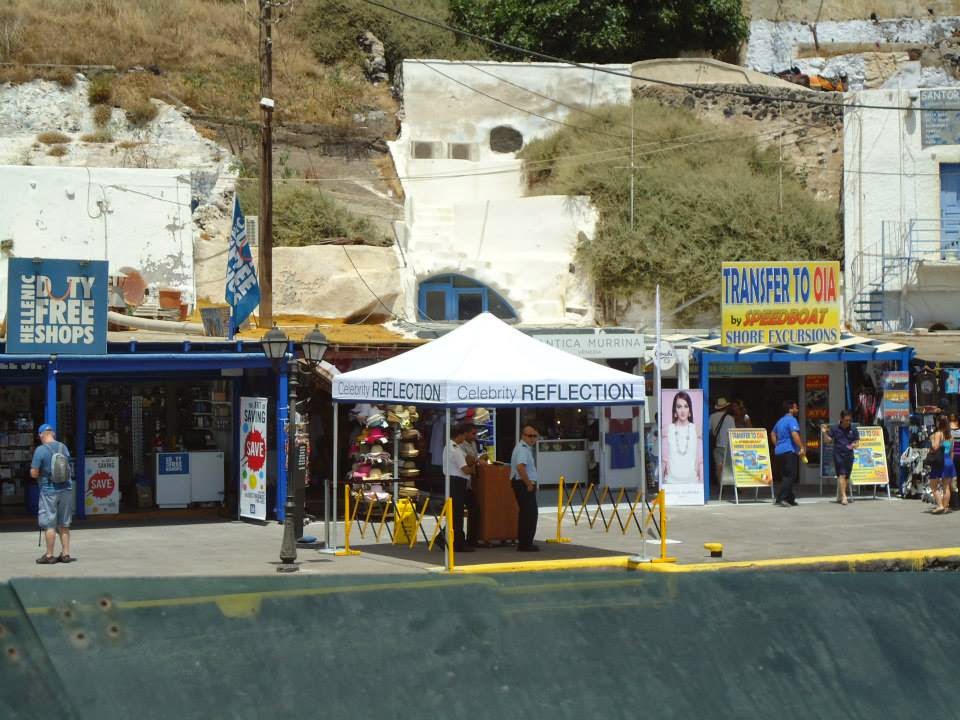 Where the tenders brought us in to did just look like a typical greek town, a bit dirty and packed with touristy shops. But the cable car was literally about to take us to a different world… 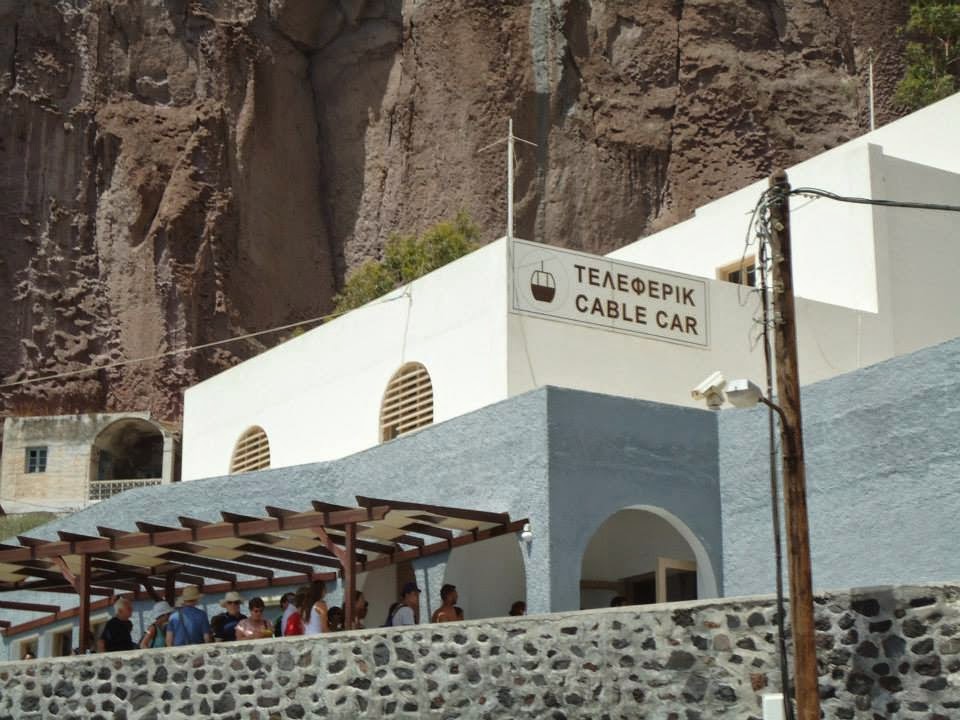 In Mykonos there is 3 ways of getting up and down to the top from the port, walk 588 steps, ride the cable car (which we did for obvious reasons!) or ride a donkey. Riding a donkey sounds like a great, cute idea but we had heard such horror stories about people being chucked off them and bashing into the walls, plus I would never support anything like that as I think it’s animal cruelty, but anyway.. riding the cable car is definitely the best option and it’s worth the few euros that it costs! 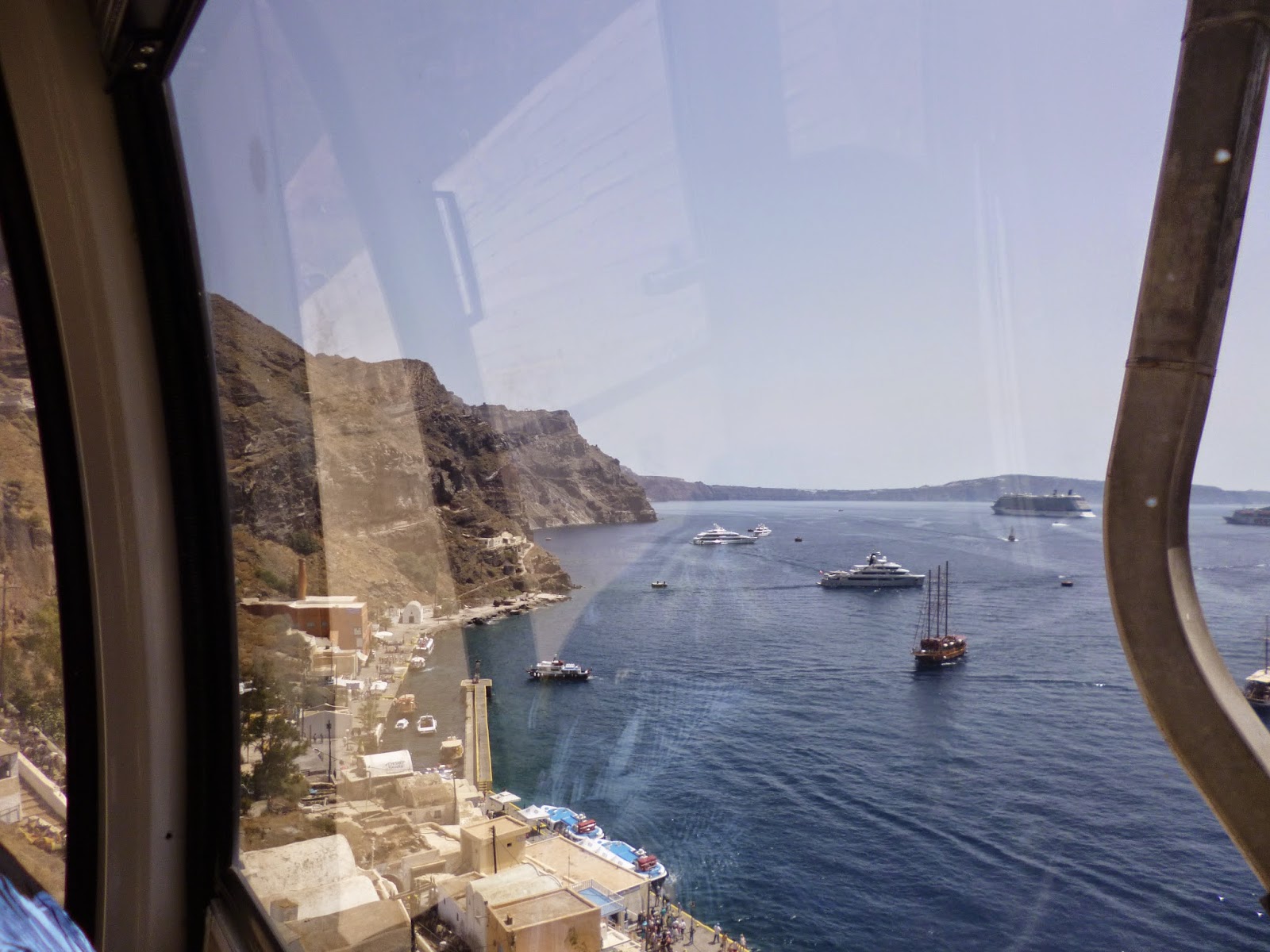 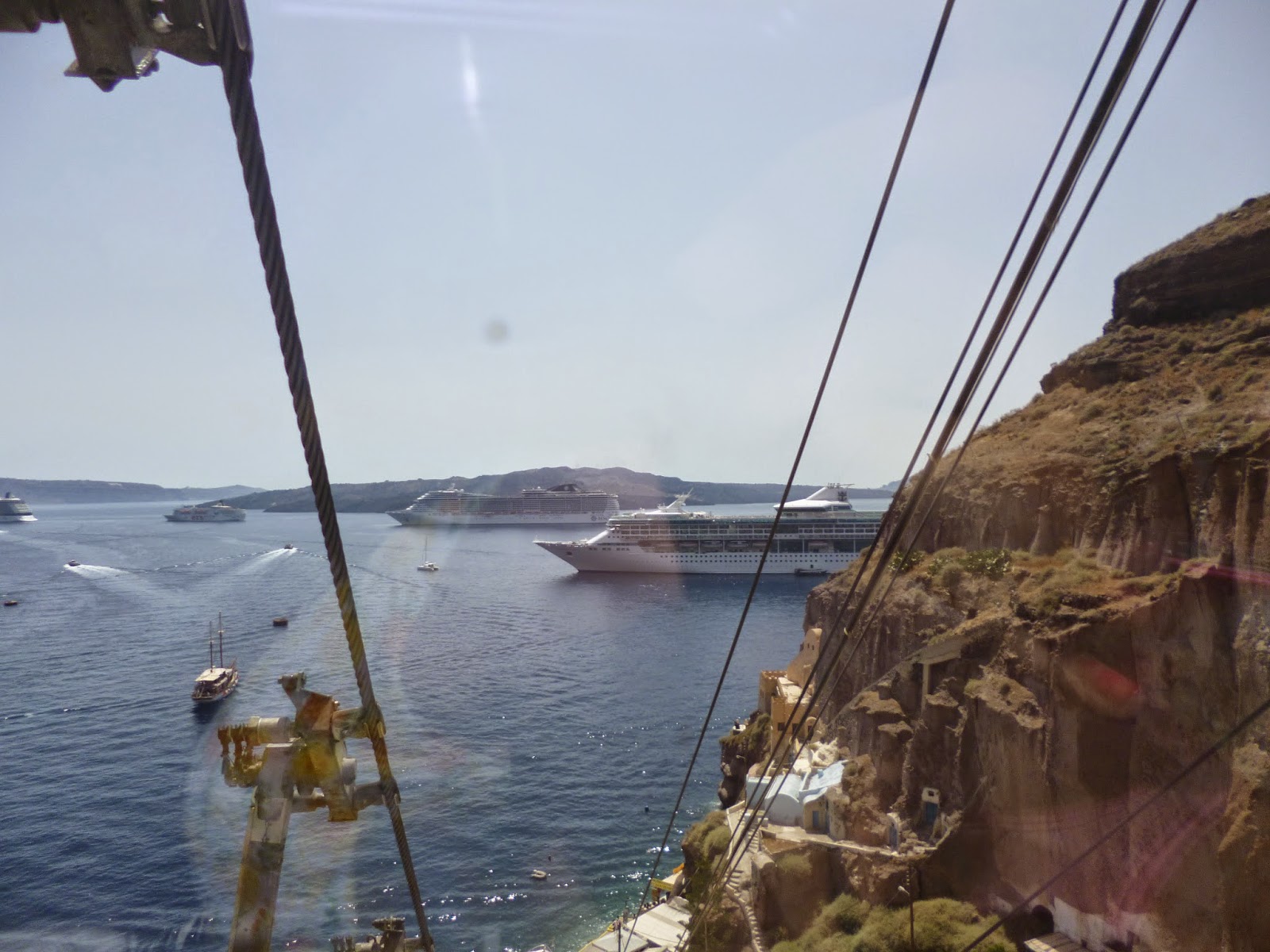 And we were up… 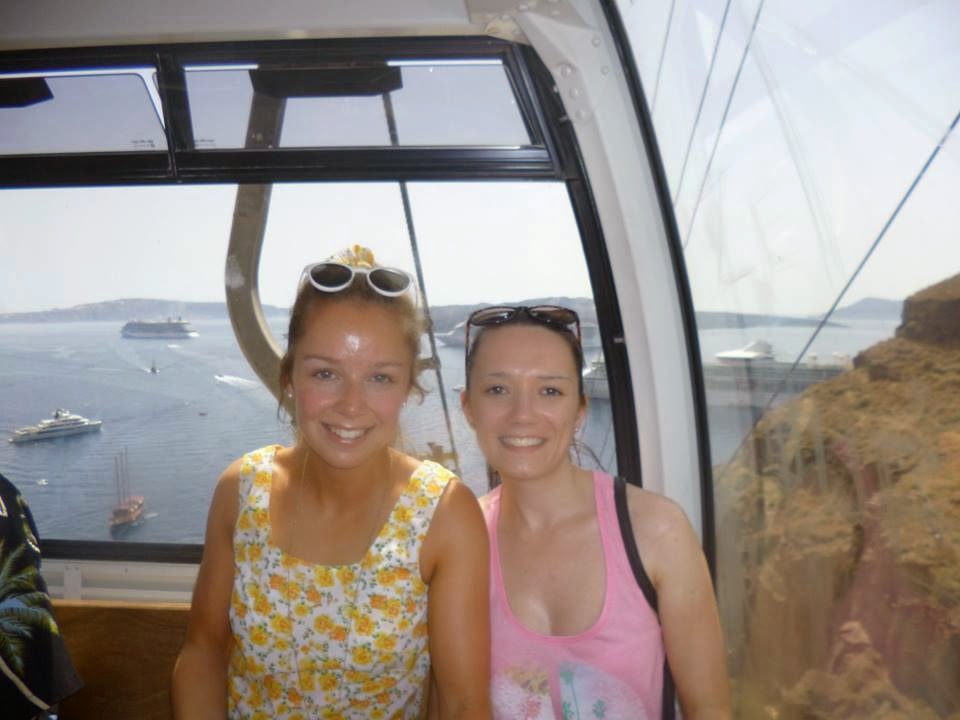 Excuse the sweaty forehead there… it was a very hot day ok?! 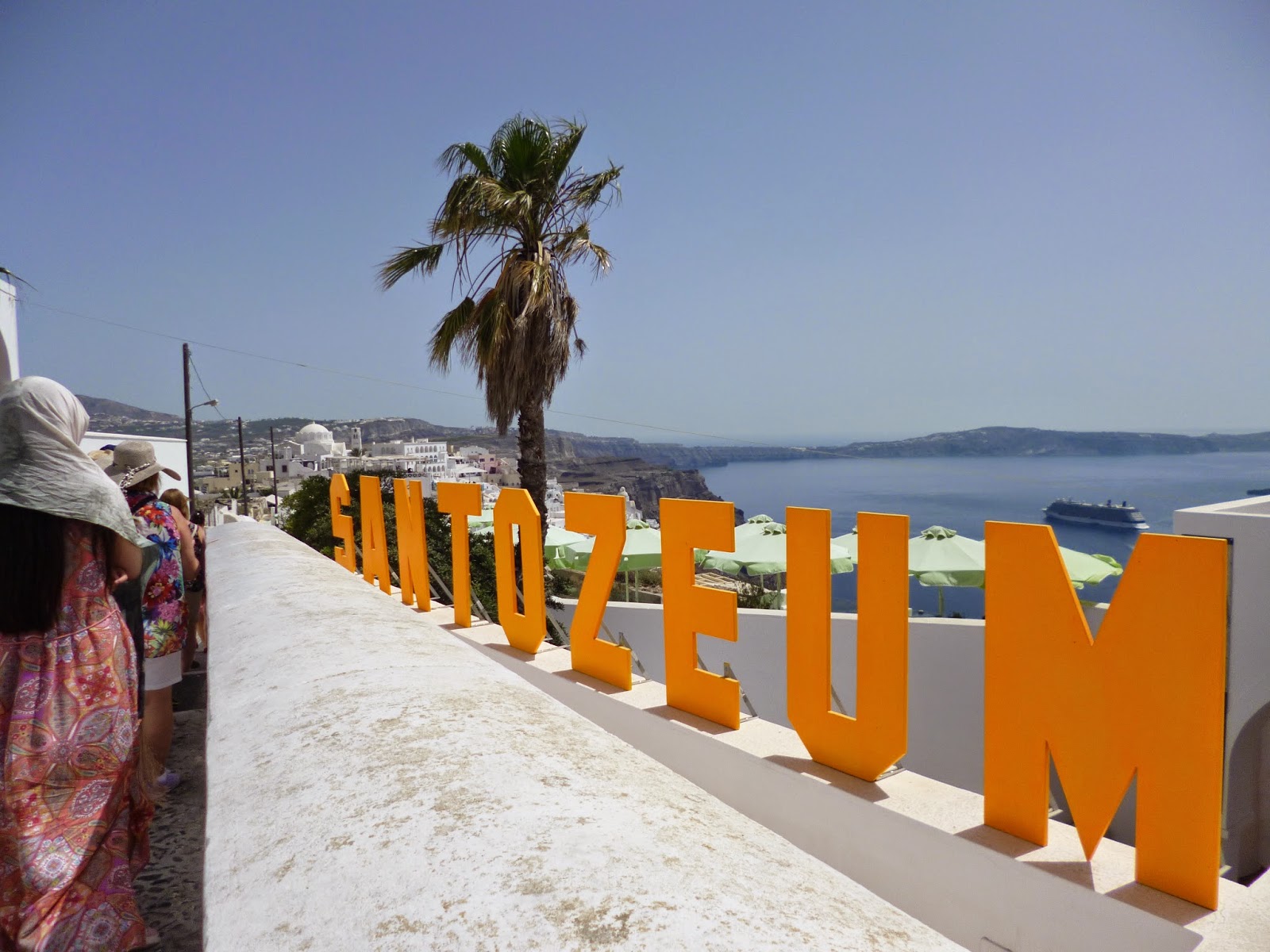 We had reached paradise, otherwise known as Fira! 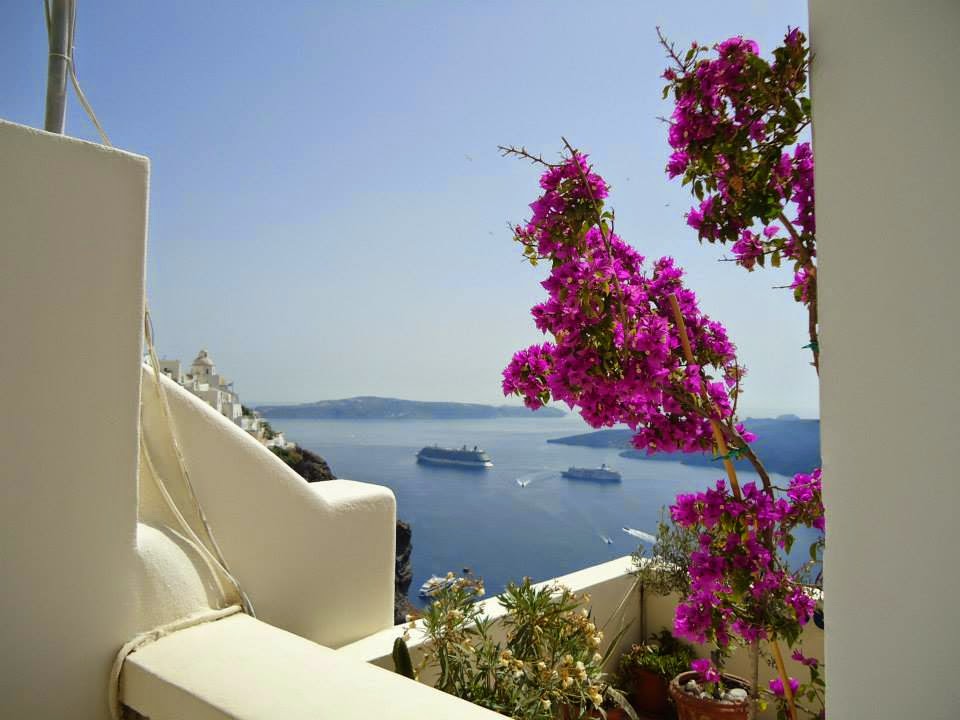 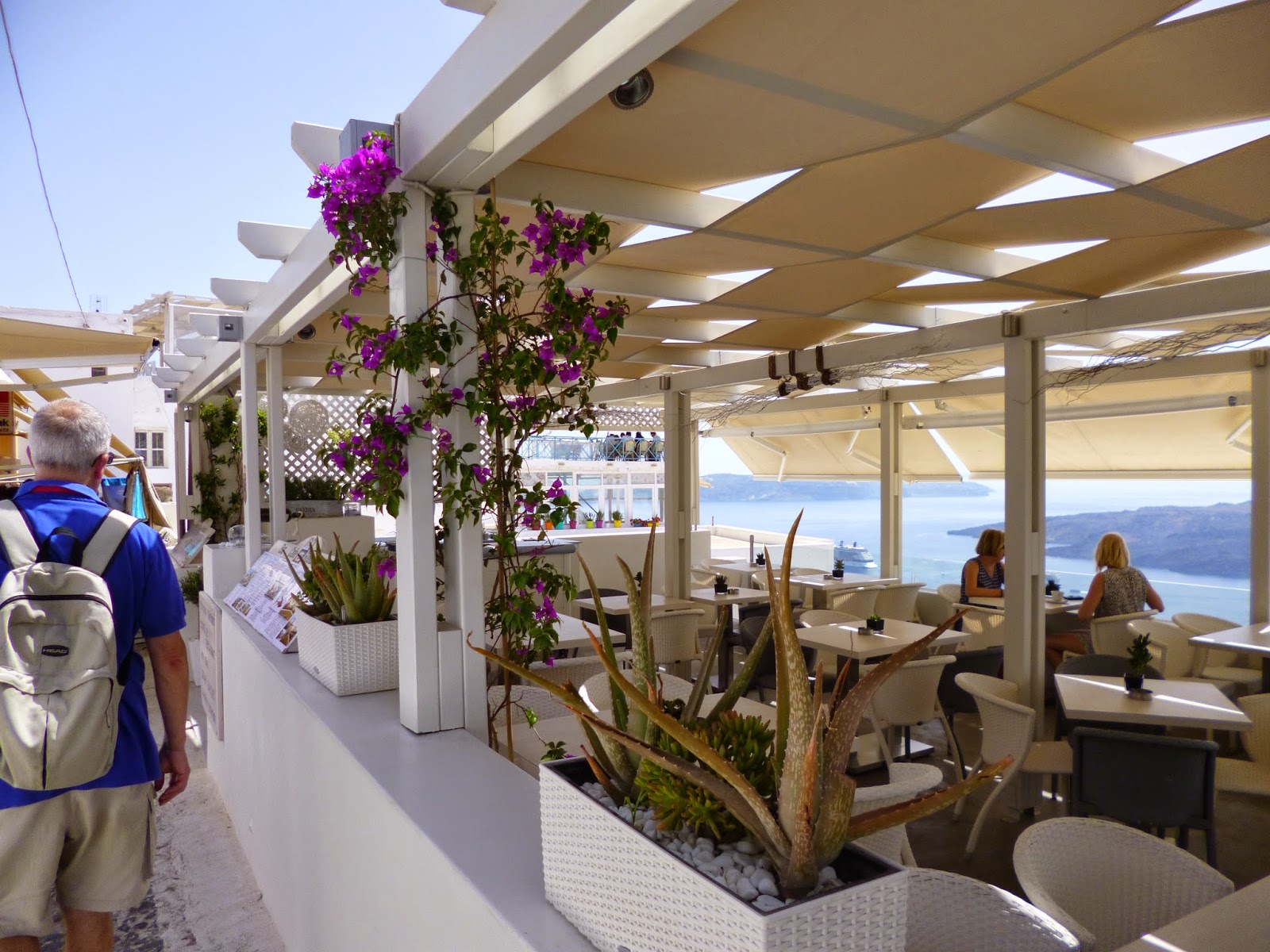 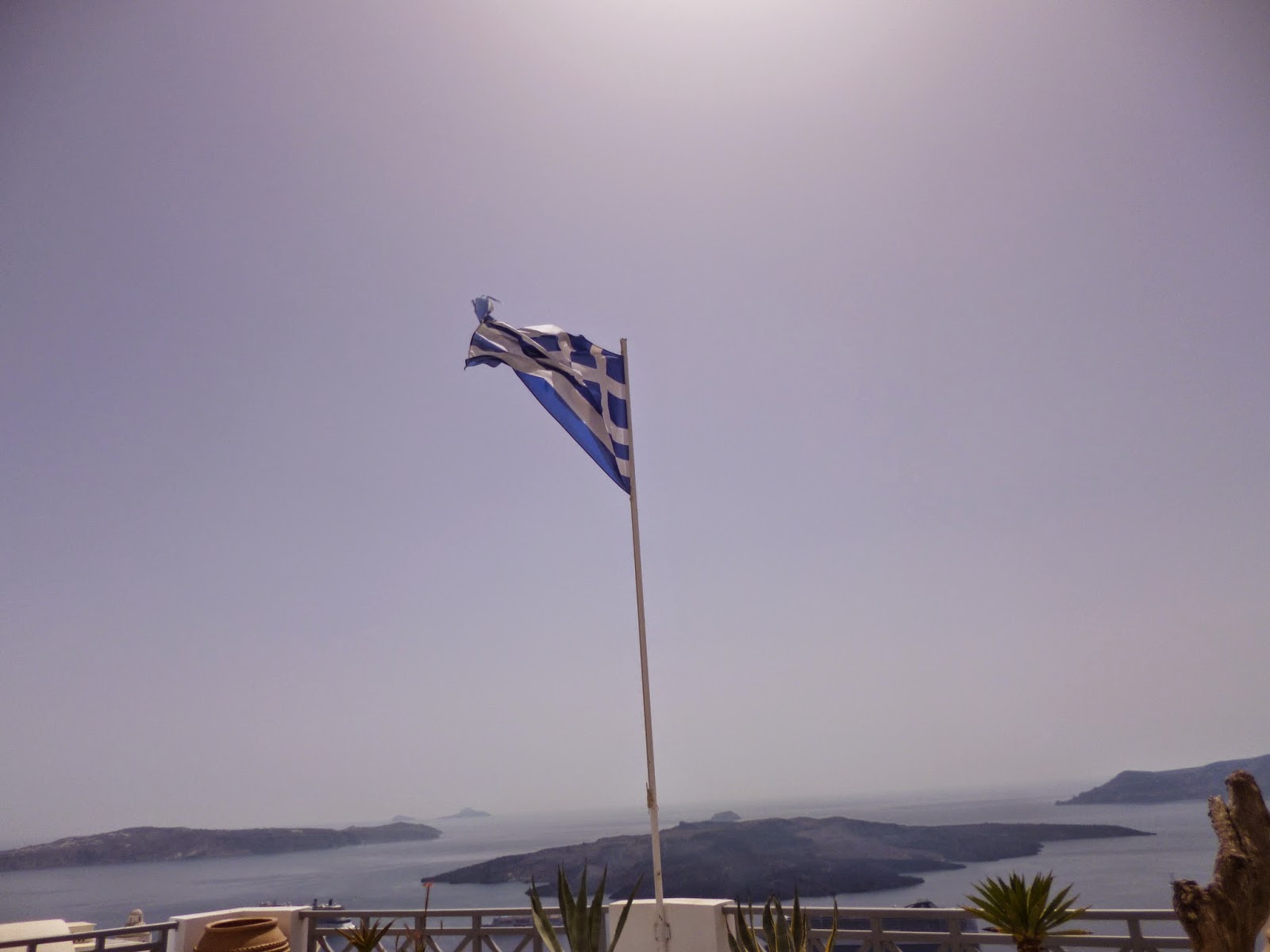 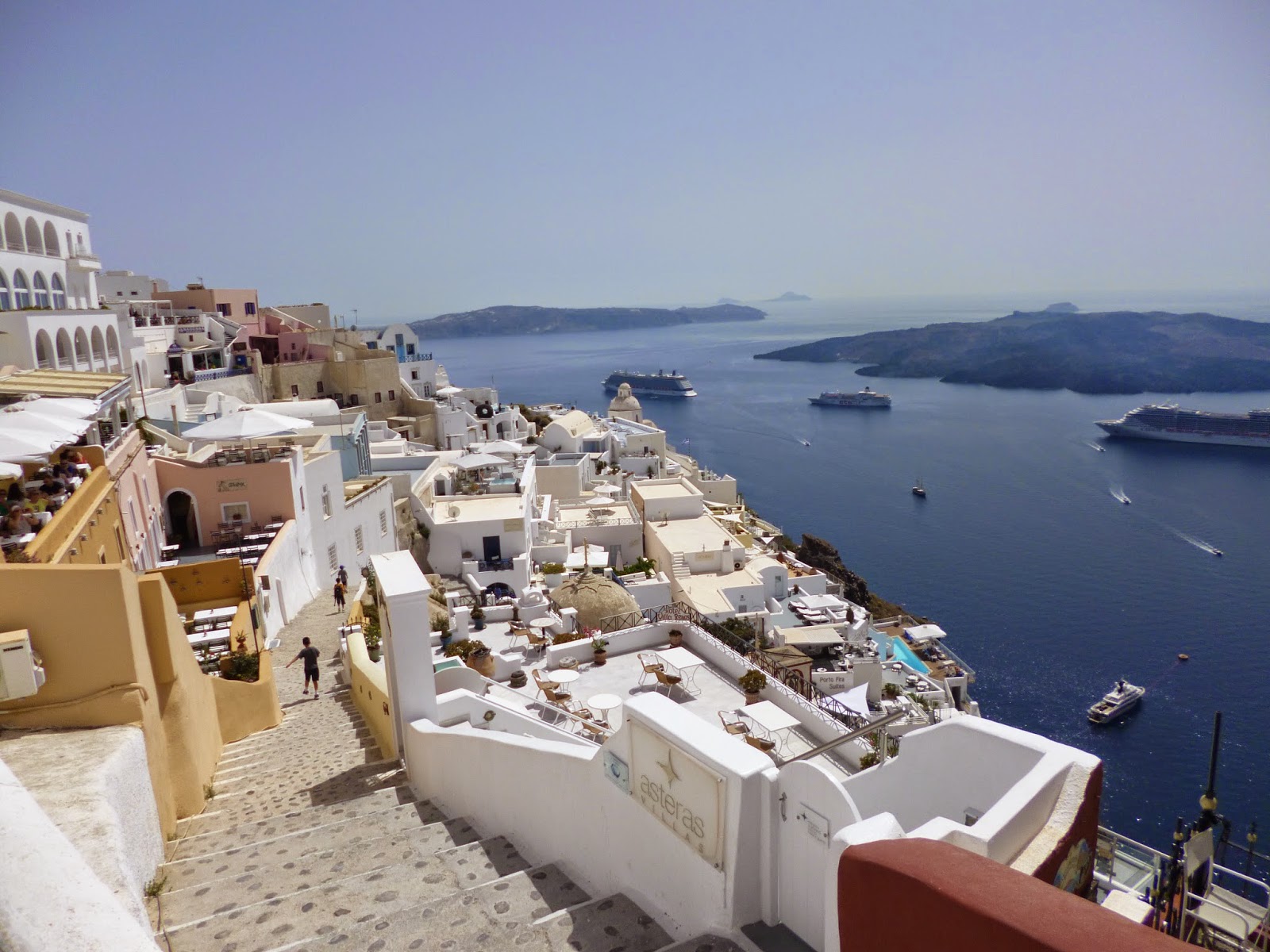 The views were out of this world, it really did match up to the Instagram pictures I had seen! 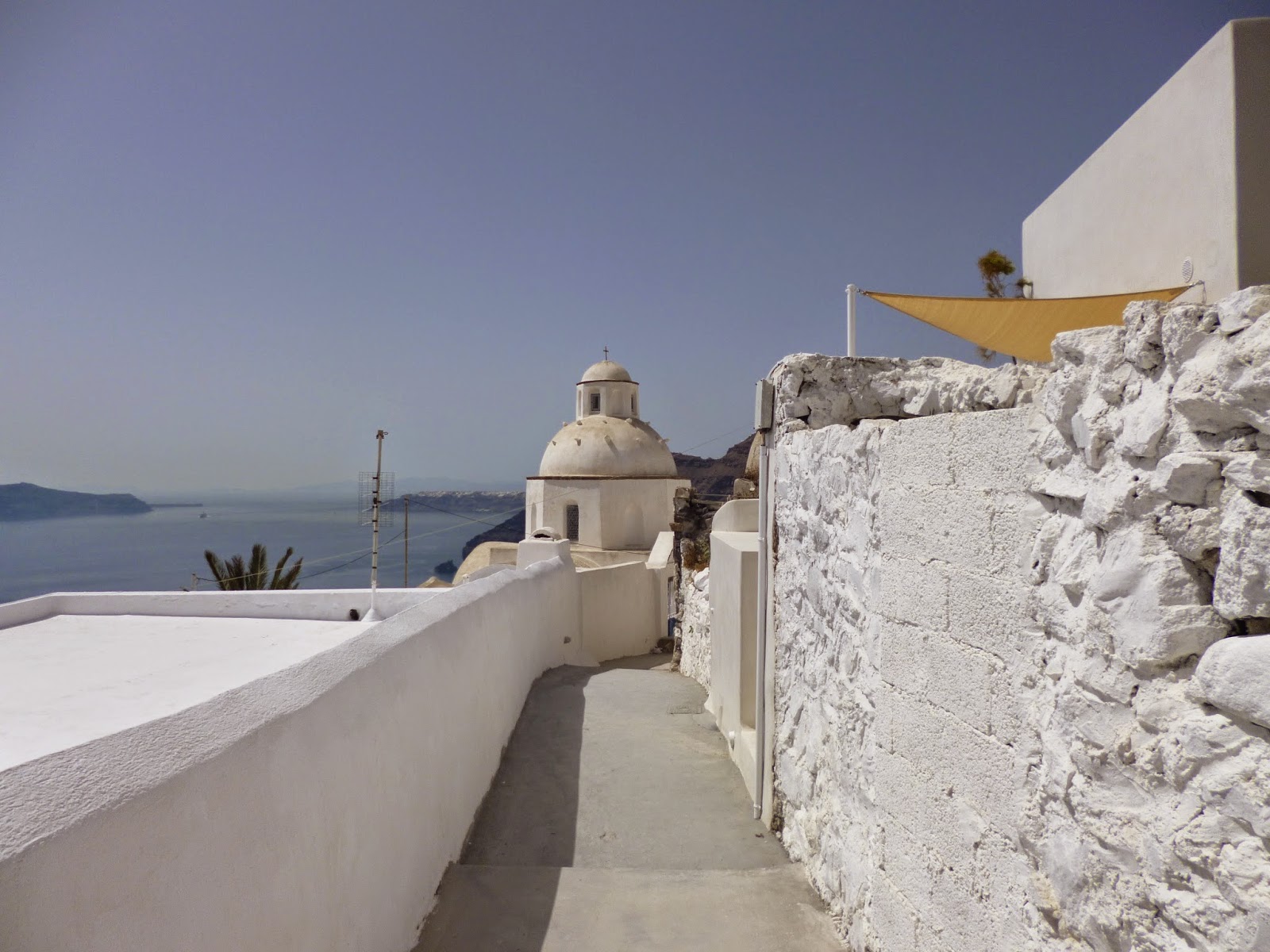 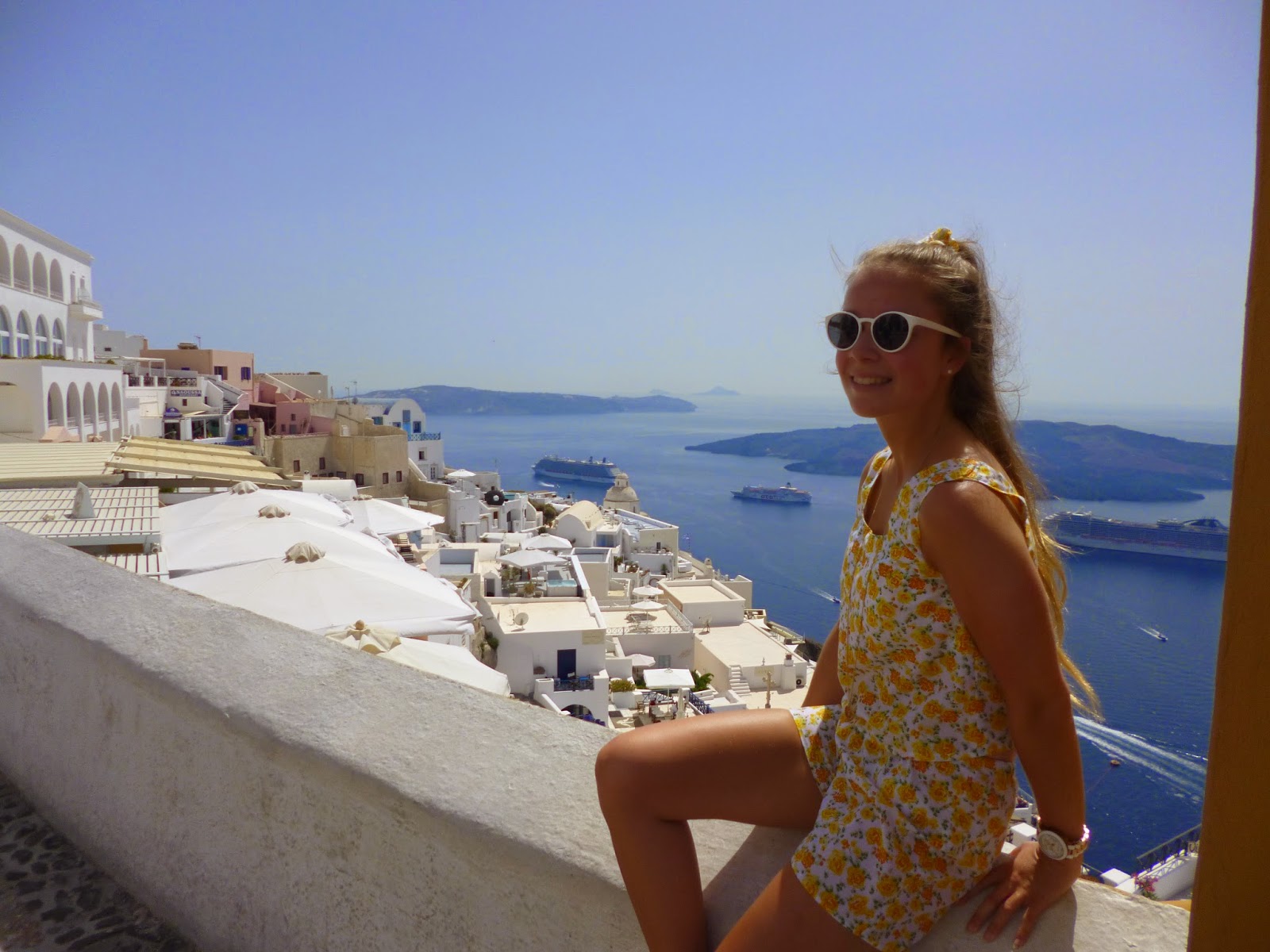 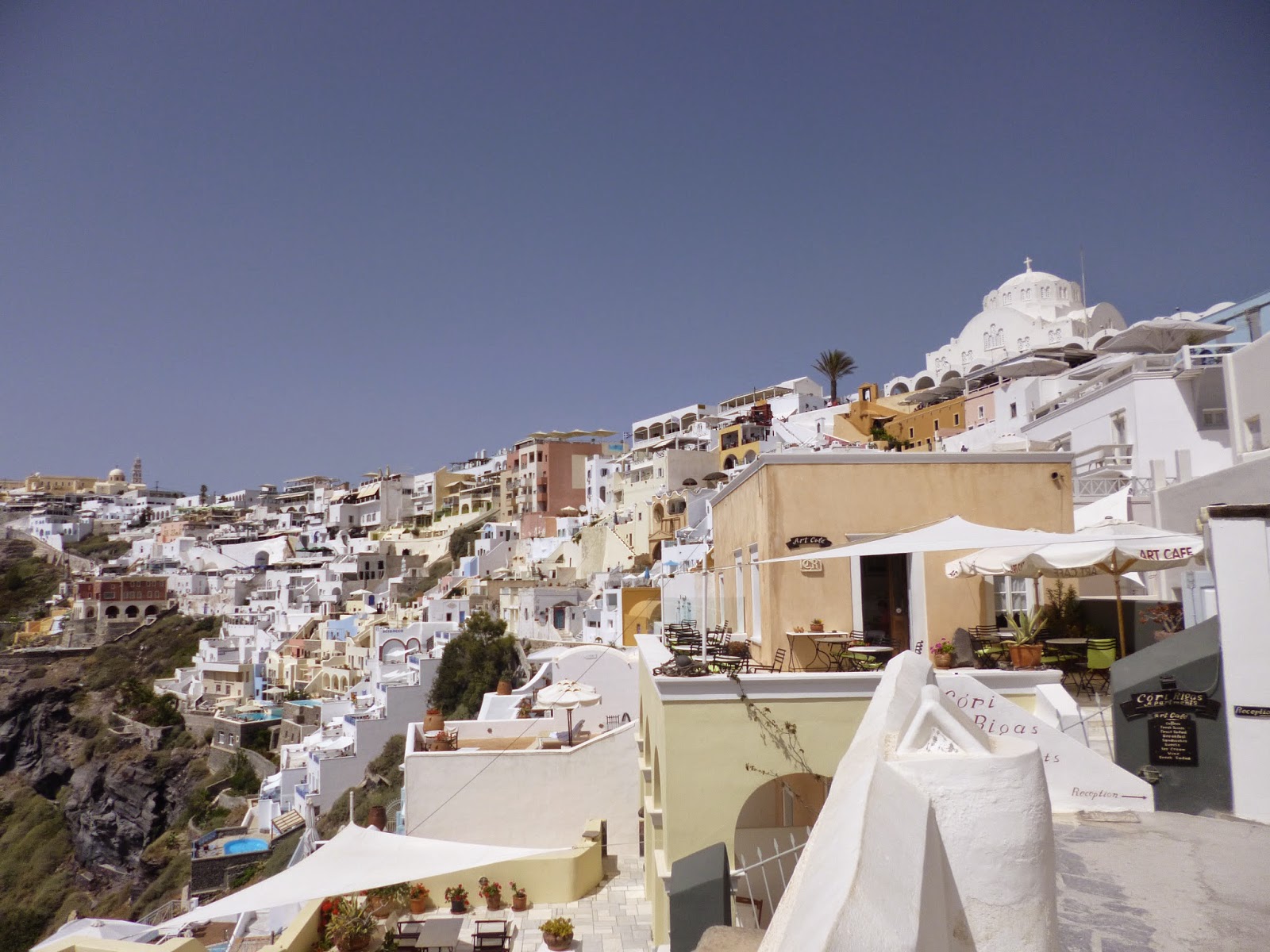 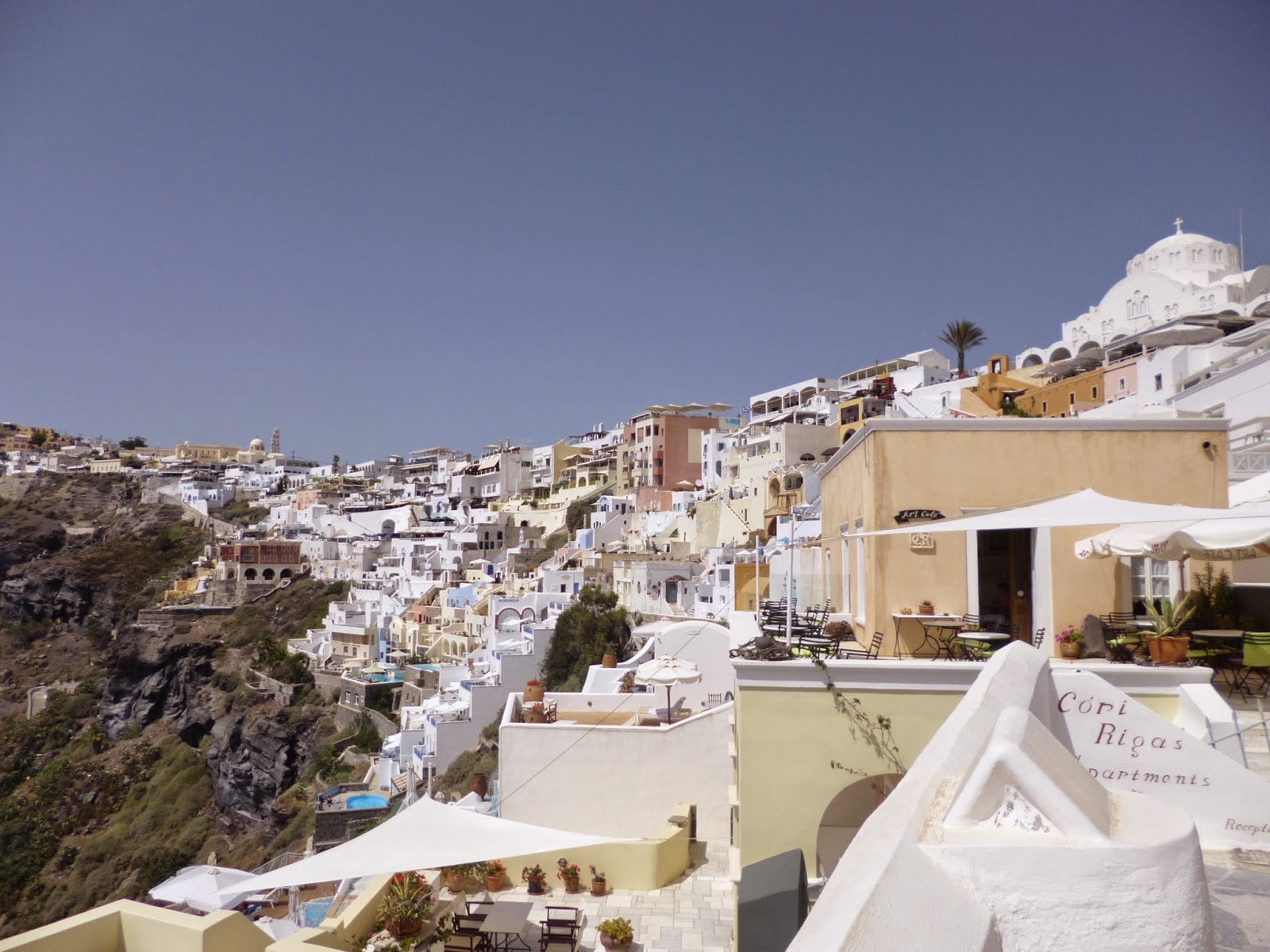 The white washed villages are lined with touristy shops, like anywhere really but the beautiful buildings make up for it and you can quickly escape the hoards of tourists to the tranquil side streets. 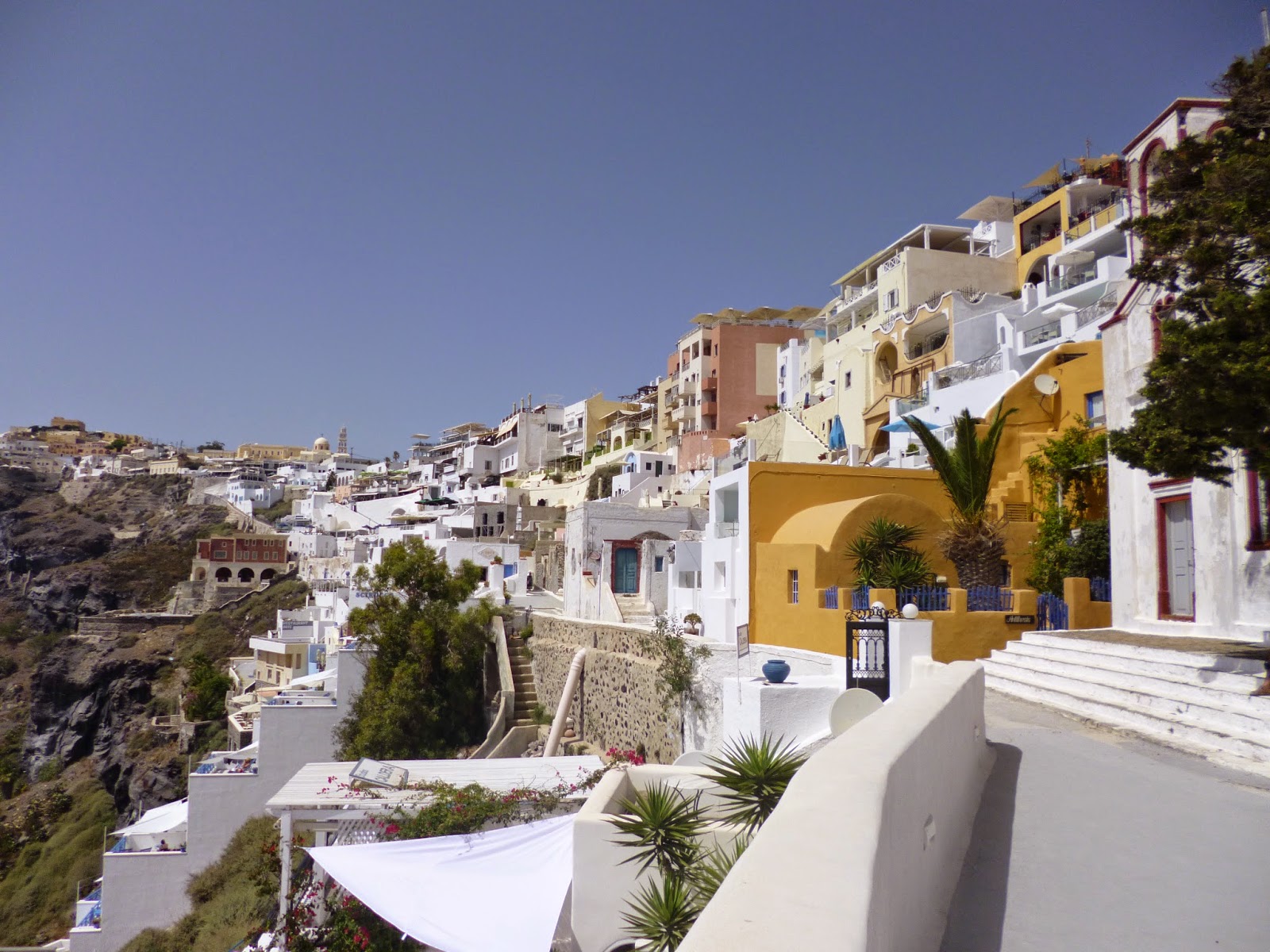 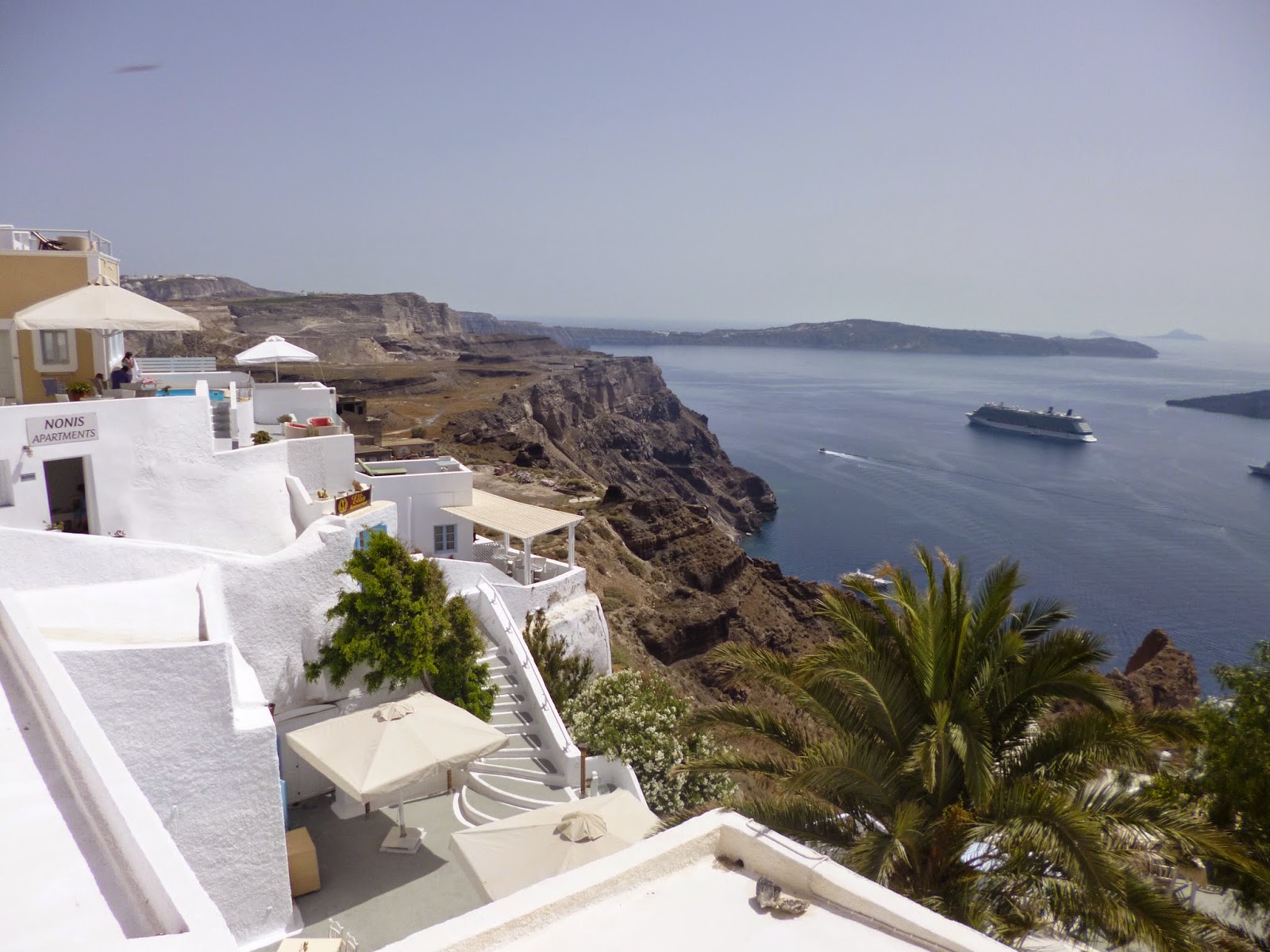 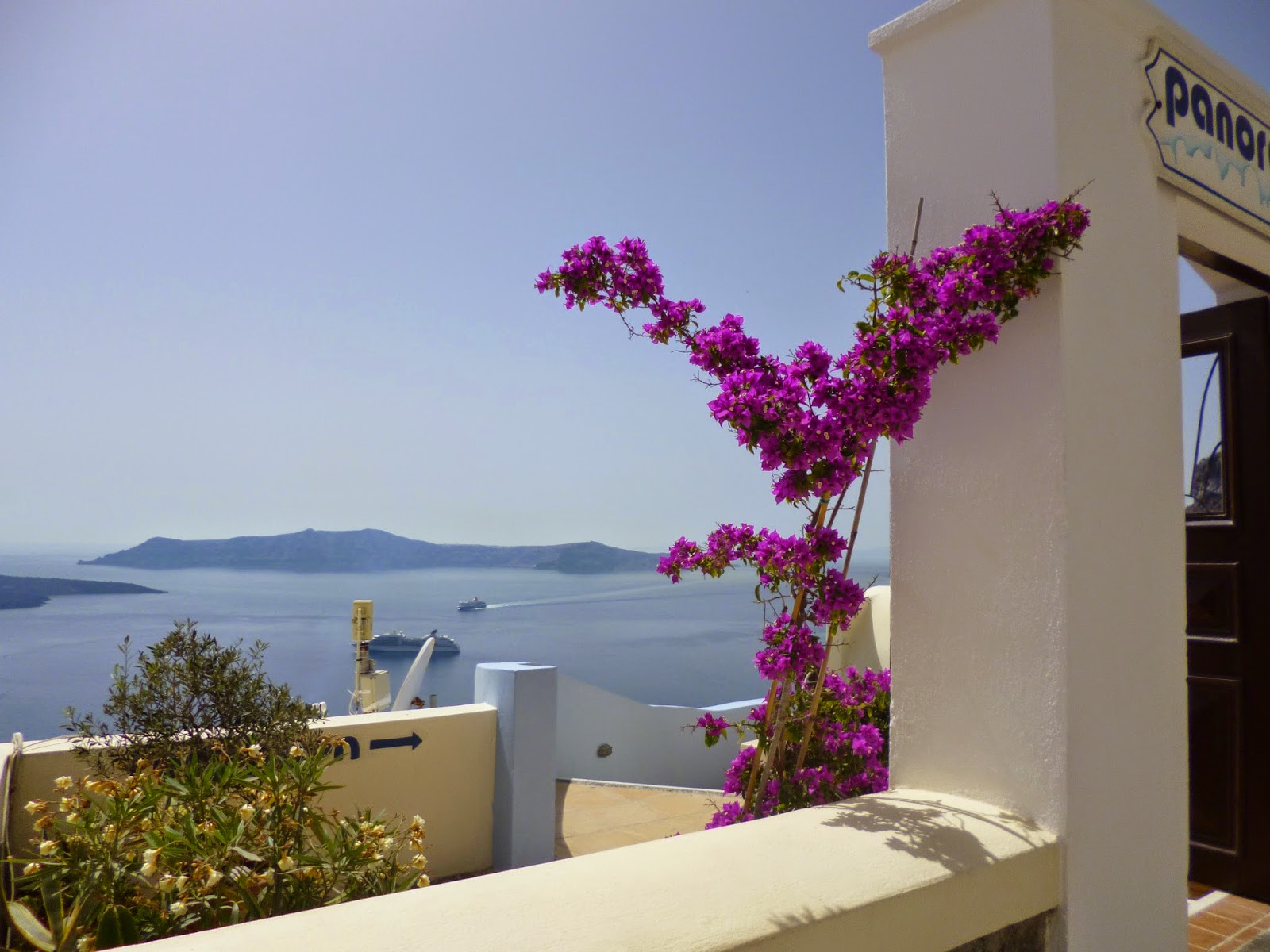 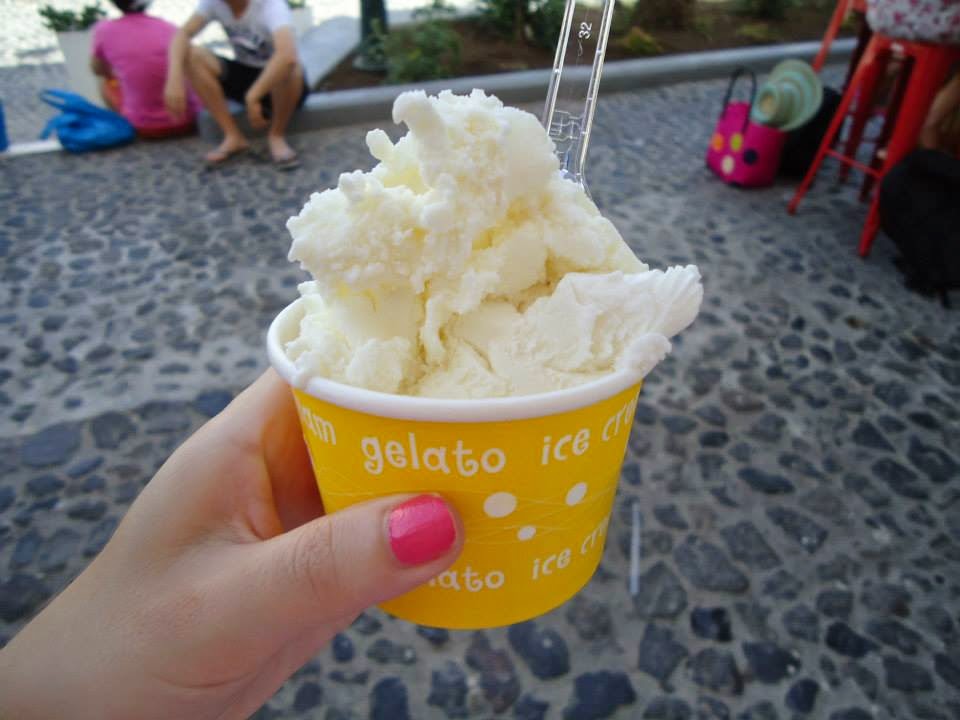 It was time for a pit stop before heading back to the ship of some Greek yoghurt ice cream, they don’t make it like the Greeks – so delicious! 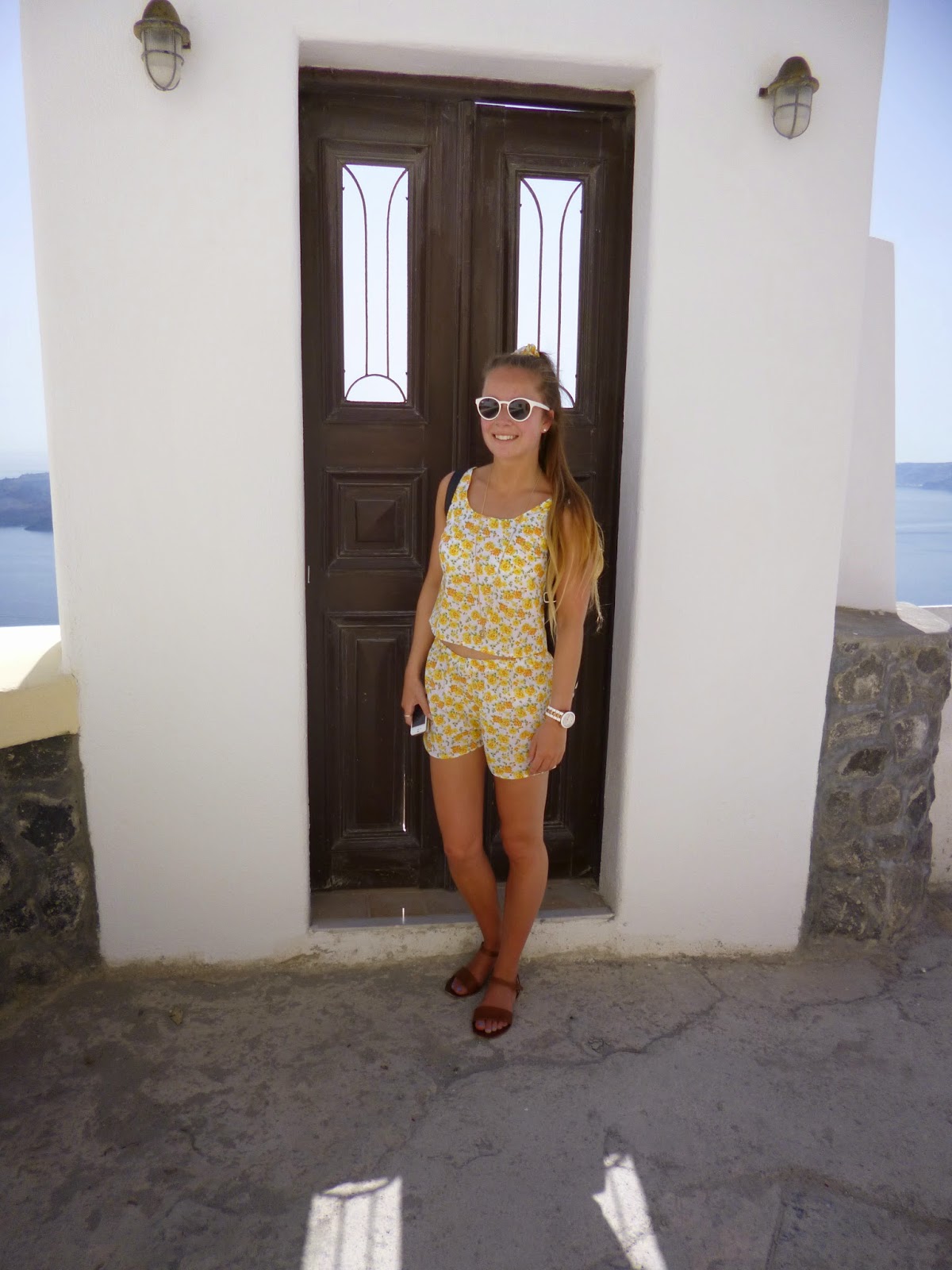 I wore my DIY co-ord, it was the perfect outfit for this island. Can it be summer again already?!

I didn’t even have my dslr camera here..all of my pictures came out amazingly well, it’s definitely helped by the clean kept white washed buildings! As we were time restricted to what we could do we only got to visit the top, but there are many other things to do if youre staying longer; you can go volcano hiking, swimming in hot springs, go scuba diving, stay in a cave hotel – it’s hard to imagine such a small island could be packed of so many exciting things to do! If you like the look of Santorini then you will love Mykonos which I posted about in the summer. Out of the two Greek island Santorini is a lot more touristy, and in the summer months it is packed but it’s well worth the trip to view this spectacular island and uncover the mysteries of the lost kingdom Atlantis or to soak up the views of the whitewashed villages and enjoy an ice cream or two…This post has made me miss this beautiful island very much and I’m now desperate to book a holiday for the summer, recommendations please!

Have you been to Santorini before? Would you like to visit this island? Where do you want to travel to this summer?